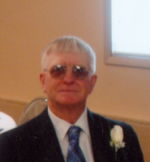 Lynn Leroy Dodd, 76, passed June 13, 2011.
Lynn was a lifelong Harrisburg resident that farmed on his family farm and worked at John Morrell & Co. for 30 years.  Funeral services will be 2:00 pm Monday, June 20, 2011 at Anderson Jones Corcoran Funeral Chapel in Harrisburg, SD.  Visitation will be 6:00-8:00pm Sunday, June 19, 2011 at the Harrisburg Chapel.
Lynn Leroy Dodd, son of Glenn and Edna (Zebarth) Dodd was born in Sioux Falls, SD.  He grew up on a farm near Harrisburg, SD and attended grade school at a one room school house two miles outside of Harrisburg and then high school in Canton, SD.
Lynn was united in marriage with Joan Clark on December 1, 1962.  The couple made their home on a farm near Baltic, SD for 7 years.  Lynn moved to Sioux Falls, SD and worked on his father’s homestead and at the same time worked in the hog kill, beef kill and beef fabrication at John Morrell & Co.  Lynn’s work ethic and dedication showed in only having used one sick day in 30 years of service and the first 27 years of that with no sick days.  Lynn also did custom plowing for farms as well.  After he retired from John Morrell he continued to farm his families farm.  When he finally retired farming in 2001, he became a lumber jack and a scraper. Which means he never officially retired!
Survivors include his three sons, Colby L. Dodd, Sioux Falls, SD, Gary D, (Julie A.) Dodd, Sioux Falls, SD, Steven M. Dodd, Sioux Falls, SD; sister, Helen Hendrix, San Diego, CA; and step grandchildren, David and Dallas.  He was preceded in death by his parents; and son, Timmy Joe.