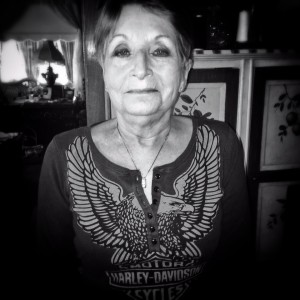 Debora Joy Schmidt passed away on July 29, 2014.  She fought a valiant fight with shear determination.  She always seemed unaffected by the challenges in her life, showing her ever present smile to everyone she met.  Debora Joy Schmidt was born Nov. 28, 1950 to Ray Glammeier Sr. & Gretchen Glammeier in Sioux Falls, SD.  She was married to Michael Lindgren.  She later married Larry Schmidt on Sept. 17, 1993.  She will be remembered as a loving and caring mother, daughter, sister and friend.  She is survived by her husband Larry, her children, Aaron Lindgren & special friend Edika of Wichita, KS, Deana Moberg of Sioux Falls, Christopher (Candy) Lindgren of Sioux Falls and Joshua Lindgren of Sioux Falls.  She had 12 grandchildren, 7 great grandchildren.  Her joys in life were her family, oil painting, deer hunting, motorcycles, her scooter and her special dog Holly.  She is survived by her siblings, Mark Glammeier; Ray Jr. (Karen); Lance (Terry); Jay (kim).  She was preceded in death by her father Ray Sr. and a brother Rick.