Service: 2:00pm Monday, October 10, 2016 at Lennox Ebenezer Presbyterian Church. Visitation will be one hour prior to the service. 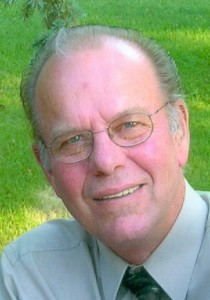 Russ was born at his families homestead on June 20, 1942 to Peter and Dina (Bunger) Poppens.

On September 9, 1966 he was united in marriage to Ruth Bossman. Following their marriage he moved from his home place across the road to their new home where he farmed.  He later did construction and sales.  He was a member of Lennox Ebenezer Church where he served as a Deacon, Elder, Sunday School Superintendent. And janitor.  He was an active member of the Army National Guard for 7 ½ years.

Russ enjoyed his newer hobbies of woodworking, raising evergreen trees and his vineyard.

Russ was preceded in death by his father, mother and brother, Milton.

Memorials may be sent to Lennox Ebenezer Church for the television ministry.

A memorial service will be 2:00pm Monday, October 10, 2016 at Lennox Ebenezer Presbyterian Church.  Visitation with family present will be one hour prior to the service.