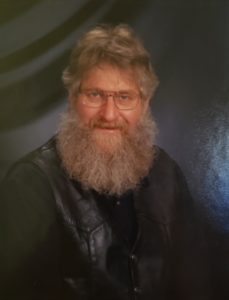 Dale Robert Albers son of Donald R. and Vivian M.(Stene Smidt) Albers was born February 8, 1954, at a hospital in Sioux Falls, SD.  Dale attended a one room schoolhouse, Rader #54, from 1st grade to the 8th grade, and high school in Harrisburg and Lennox, graduating from Lennox High in 1972.     Dale was united in marriage with Valerie Hanson on February 22, 2008 in Harrisburg, SD. He worked at A&M Storage, for Mike and Gloria Simpson for over 20 years as the maintenance man, and other positions. Dale had many interests but the one that takes top and center is his love for guns. He also loved fixing and riding motorcycles from a young age, beginning with his first Norton bike and up to his Harley Davidson.
Grateful for having shared his life are his wife, Valerie Hanson Albers; granddaughter, Courtney (Seth) Roach, Sioux Falls, SD; siblings: Carole Razayeski, Gaston, SC; Richard Smidt, Harrisburg, SD; Jolene Erickson (Danny), Sioux Falls, SD; Marlene Whitaker (Charlie), Phoenix, AZ; Patty Kramer (Dr. Jon), Eagle, ID; sister-in-law, Luann (Kenny) Thompson, Rockford, ND; many nieces and nephews and a host of other relatives and friends.     Dale was preceded in death by his parents, both sets of grandparents, a nephew, Kevin Javers, and a special first cousin, Gary Sundby, who was more like a bonus brother.