Visitation: There will be a celebration of life visitation 6:00-8:00pm on Wednesday, June 9, 2021 at Anderson-Jones-Corcoran in Harrisburg, SD. 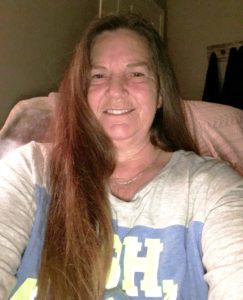 Claudia C. Krall of Harrisburg, SD passed away Friday, June 4, 2021 at Avera McKennan Hospital in Sioux Falls, SD. There will be a celebration of life visitation 6:00-8:00pm on Wednesday, June 9, 2021 at Anderson-Jones-Corcoran in Harrisburg, SD.

Claudia Cherie Boulware, daughter of Fred and Lois Boulware was born May 24, 1958 in Denver, Colorado. Throughout her life, she lived in Colorado, California, Montana, before settling in South Dakota. Since moving to Harrisburg in 2010, Claudia was employed in customer service positions in the Harrisburg community. She worked at Casey’s General Store, Walmart, and Sam’s BP (Friendly’s). During those years, she built a lot of relationships across the Harrisburg community and touched a lot of lives with her free and accepting spirit.

She enjoyed painting, spending time with her grandchildren, and her cats Rocky, Casey, and Tigs.  She enjoyed listening to music and attending concerts with those she cared about. She looked forward to her trips to the Black Hills with family.

Grateful for having shared her life are her children: Stephen Krall III and his wife, Stacy, of Harrisburg, SD, Matthew West of Eugene, OR, and Jessica Hagler of Lancaster, CA; five grandchildren: Stephen Krall IV, Brayden Krall, Kennedy Jo Krall, Dominic Krall all of Harrisburg, SD and Silah Hagler of Lancaster, CA; sister Carol Holm and her husband, Jim, of Kalispell, MT, and many other relatives and friends especially her lifelong friend Bobby (B-O-B) Muck.

Claudia was preceded in death by her parents, Fred and Lois Boulware and her son Dana Rogers.