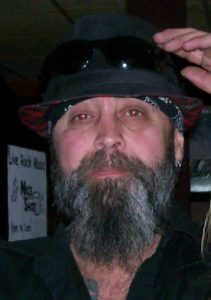 Robert “Bob Wyr” Corcoran, 55, son of Robert James Sr. and Mary Jo (Montgomery) Corcoran was born on May 4, 1966.  He grew up in Sioux Falls, and Harrisburg, SD where he attended school. Bob worked construction for several different contractors over the years, but enjoyed his job at Horner Lumber the most where he said he felt like family.

Most may remember Bob from passing through Harrisburg at the Phoenix Lounge.  He was a trade mark their singing and playing his air guitar.  He always greeted the ladies with a hug and a kiss on the hand.  The Phoenix Lounge was his true family as he spent many happy hours there with friends over the years. He may have had a rough exterior but lived his life to the fullest and left us to remember his gentle soul  and heart of gold.  Farewell Bob Wyr, he will be missed dearly by his family and many friends.